Today is the International Day for the Elimination of Violence Against Women (IDEVAW), kicking off 16 days of activism in raising awareness of gender based violence, and strategising to end it.

The day has existed for 30 years. It has been recognised by the UN, been adopted by over 6000 organisations across 187 countries, and has reached over 300million people.

These are incredible strides forward. However, in spite of the action we have seen  over 30 years, levels of violence against women and girls remained largely unchanged in the decade leading up to 2018.

The road to ending violence against women and girls (VAWG) is long, complex, and requires meaningful action from individuals and organisations alike.

Here are 10 things that you should be considering over the next 16 days of activism and beyond.

This should go without saying, but we know that typically victim survivors of assault are not believed when they do find the courage to speak up. Perhaps this is because the accused is typically known to the individual; according to the RAINN group, 72% of sexual assaults are committed by acquaintances of the romantic partners of victim-survivors, making it harder for those close to them to accept. Or perhaps it’s because of the toxic narrative that women are somehow responsible for the behaviours of violent people (often men). Believing survivors means not asking what actions they took that led to their assault, and instead asking how you can help them find peace again. It means acknowledging that the rate of false reports falls somewhere between 2% - 6%, so the person speaking to you is almost certainly telling you the truth. Believe them.

Whether it’s derogatory comments towards women at work, emotional insensitivity, or using gender to explain behaviours (think: “it’s just what guys do”), toxic masculinity contributes to an unsafe environment for men and women alike. Challenge it where you see it, including in yourself. This can look like simply speaking up, saying a comment is inappropriate, or reporting it if you feel unable to speak up in the moment.

Staying silent on these issues creates an environment where the behaviours that lead to violence and assault are normalised. It is each of our responsibility, at school, university and work, to show that violence towards women and girls is unacceptable.

In order for people to feel safe in doing this we must first raise awareness of what these behaviours and thought patterns look like. Organisations and individuals have a role to play in this. Building awareness campaigns within institutions to help people to understand what inappropriate behaviour looks like, sharing information you see on social media, or raising the topic at home and in your sphere of influence are all ways in which we can raise awareness.

It may seem like basic stuff, but all you need to do is look at the news to see that inappropriate behaviour is still passed off as ‘banter’ or ‘just a joke’.

Another important element of this is creating the psychological safety for women to be able to speak up on how cultures and behaviour impact them. This can look like networking groups or safe spaces within your organisation or community for women to come together and share.

It also means that the options given to women to speak up are created in a way that prioritises their psychological safety, giving them the freedom and power to speak up where, when and however is safest for them.

From there, we can build a culture where speaking up is expected, and encouraged.

Often overlooked is the ability to speak up on behalf of those that don’t have the strength to do so yet. Of course, this may not be the wishes of the victim-survivor, and you should always take their lead in what should be done. However, asking the question and speaking up where you have the agency to do so can make a lot of difference in showing women that you are there to support them.

As an individual, this means supporting, or helping victim-survivors to find support.

As an institution, this means having robust processes for support, investigation and importantly, discipline.

Our partners find that in year one of having their reporting system most people choose to report anonymously. Once trust is established, reports increase and the majority of those are named. Here’s one example of this taken from a recent report from our partners.

VAWG is happening, but people do not feel safe enough to tell you about it. By being consistent in your approach, being survivor centric, and taking action, you can help to end violence against women and girls.

Women experience violence differently. Of women who report experiencing domestic violence, 10.6% identify as mixed white/black Caribbean compared to 5.7% of white women and 3.7% of black women. In the workplace, black women, LGBT+ women, and women with disabilities  are more likely to experience microaggressions than men or women of other backgrounds. 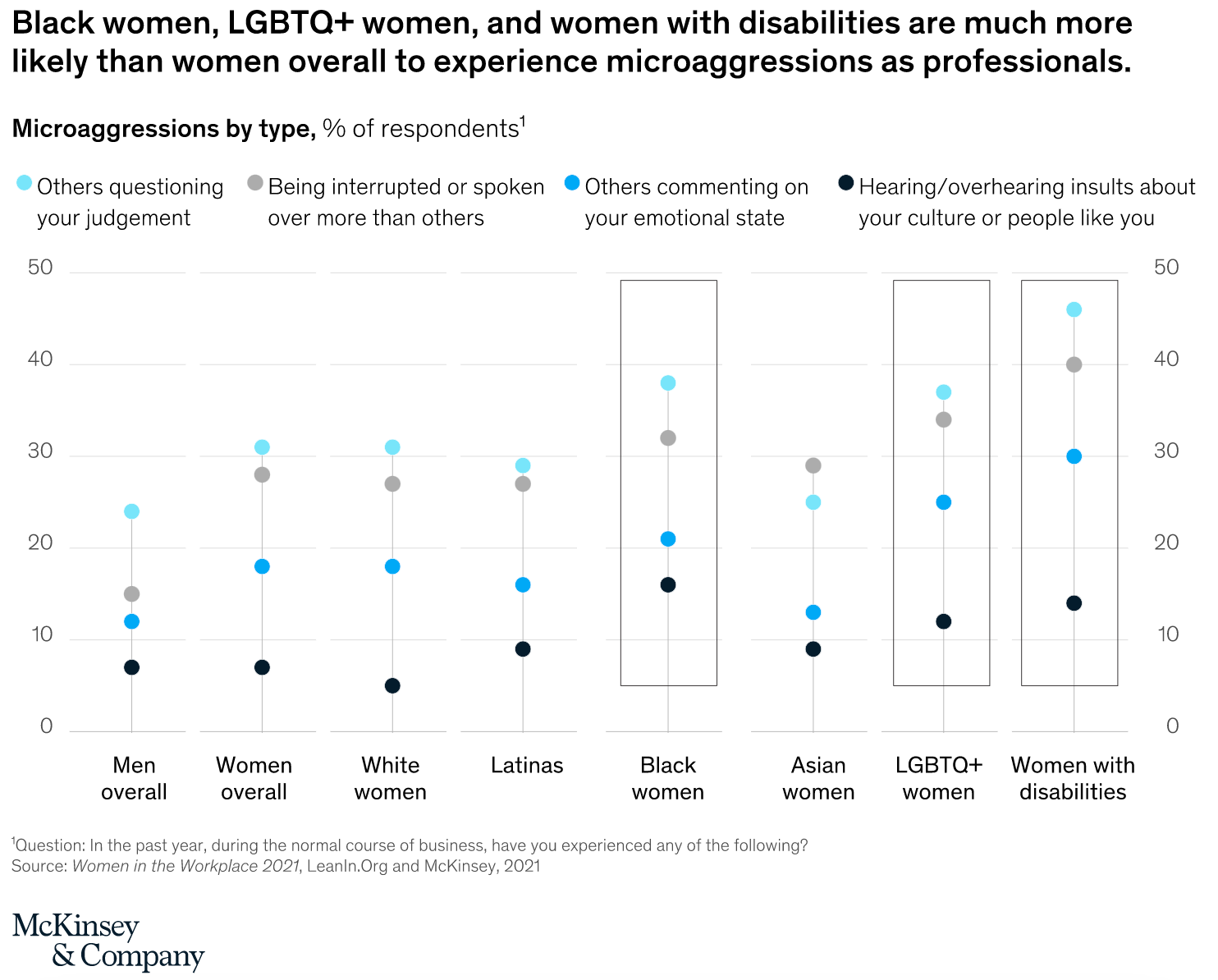 Instead we need to ensure that the voices of all types of women are being consulted when developing policies. Those policies need to consider the needs of a variety of different women, and ensure that there is room for adjustment where needs may differ by individual. Importantly, when measuring impact, ensure you’re measuring the impact across different groups.

When it comes to consultation, hearing the voices of different women is very important. Equally as important is ensuring that those voices are counted where it matters.

This is in everything from the development of policies to tackle gender based violence to decisions on organisational restructuring. Ensure your decision makers are diverse, but also make sure that those voices all have equal opportunity to be heard and to influence the outcomes of the decisions being made.

If you’re doing a good job, tell people about it! This might open up discussion on how you can improve the work you’re doing. It can also inspire other people to take action in their own space.

The more we collaborate to figure out what works, the closer we’ll be to living in a world where women are less likely to experience violence and abuse.

Here’s a list of Generation Equality Forum commitment makers in countries and regions across the globe that are doing great work in this area. Look into their work and see how you can support them in your sphere of influence.

As we roll around to Human Rights Day on December 10th, remember that this is only another day in an ongoing journey to support women’s equality.

Put a reminder in your calendar to return to this blog in 3 months time and ask yourself what you have been able to achieve or what you have encouraged others to do in this space.

If we stop now, women and girls will continue to experience harassment and violent behaviour. The more we speak up, the more we take action, the more lives we help.

Take a step towards encouraging your employees to speak up about gender based discrimination and harassment, so that together you can help make work safer for all women.

Speak to our team today.

How to respond to student complaints effectively

4 ways you can enhance the student experience

Sign up to our newsletter to receive monthly insights and resources.